Some time ago I visited one of the oil palm plantation in Palembang. Area of palm oil palm plantations is not too large, approximately 8000 ha (core plantation) and 40,000 ha (plasma). Fresh fruit bunches (FFB) harvested from the plantation is then processed in the palm oil mill near at one end of the garden. Factory processing capacity currently approximately 50 tons of FFB / hour. From the processing of FFB produced CPO (crude palm oil), waste OPEFB (oil palm empty bunches), and liquid waste. OPEFB waste volume large enough, in one day can reach 150 tons. 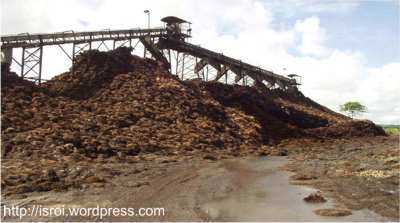 OPEFB waste become one of big problems for the oil mill. Previously they burned directly OPEFB with Incinerator. Waste burned directly and the rest of the burning ashes could be used for fertilizer, because the K-high content of the ash. Now, the government banned the burning. Factory management had to find out a solution to this waste problem. There are several alternative solution, for example: open dumping, mulch, and compost. One suitable alternative is for mulch to the plant oil. However, this technique raises another danger for palm oil plantations. Because OPEFB could be a place for nesting horned beetle pests and rat pests that are harmful for the palm oil. 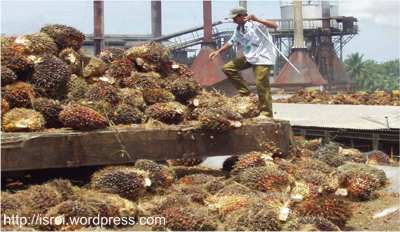 Processing methods more promising is the making of compost. With conventional techniques, composting takes place in a long time, which is approximately 3-6 months. Can imagine how much area of land and labor used to accommodate all waste OPEFB for 6 months. The technique is not economical and inefficient. We came to the factory with the task to solve this problem, namely how to create/process OPEFB into compost by more economical and more efficient method in a relatively short time.

At the time of the survey in the field, I walk along the pile OPEFB. I observed from the pile and I saw many mushrooms grow in the pile of OPEFB. Some mushrooms are edible. Size, color, and shape vary. This fungus seems to appear gradually. Seen a succession of growth of this mushrooms/fungus. Fungus, which first appeared is a microscopic fungus that bright orange mushrooms also often called oncom fungus, Monilia sp. These fungi grow rapidly and cover most of OPEFB. Over time, the fungus that grows began to change. Many macro mushrooms that grow later. Description of these mushrooms I describe below.

This fungus grows as soon as OPEFB out from the oil palm mill. Bright orange mushrooms such as color of oncom (sundanesse foods) that are often also called oncom mushrooms. This fungus is a group of microscopic fungi. Its scientific name is Monilia sp. This fungus seems to eat the remains of the oil that is in OPEFB. The fungus will continue to grow until the remaining oil to dominate the thinning / out.

Mushrooms ‘dick’ is actually similar to the ‘merang’ mushroom.

‘Dick mushroom, common name of this mashroom. People often call this mushroom as ‘konthol’ mushroom (kontol = penis in javanesse language), because the shape similar to the genitals of men. Its is delicious edible mushroom, so much sought after by employees or the surrounding community. I think this mushroom is one genus with common mushroom, ‘Merang’ mushroom (Volvariela volvaceae). Its shape is very similar to merang mushroom, brown-gray. The color of young mushroom are gray/light brown and shaped round like an egg, but this bubble size larger than usual mushroom. When it began to grow up, cracks will appear at the end of the spheres. After that came out the body of the fruiting body. The size of the fruit body can be very large. Mushrooms I’ve ever planted, up to 30 cm in diameter. The size of circles at the time a child can reach the hands of a handful.

This delicious mushroom stir-fry made, cooked with noodles, or make soup. It was chewy, chewy and tasty like chicken. This fungus most delicious when still buds (rounded). If cooked when its grow up to big mushroom, its is little less comfortable. Here are how to cook it, clean up mushroom with water. Peel and remove the hood of a black fungus, washed once again. Cut the desired size. Here….it ready for cooking.

Dick fungus grown with media OPEFB, can grow up to a maximum. Hood diameter reached 25 – 30 cm. Mushrooms are harvested when bubble size about a handful of adults.

Ear mushroom is often sold in the traditional markets. Its color are dark brown, rubbery, and undulating like the ears of people, because it is called ear fungus. I found this mushroom in exile OPEFB, not OPEFB pile. In this place also found a lot discarded slender ash.

Shape of this mushroom similar to the white oyster mushroom (Plourotus ostreatus). But these mushrooms are small at all. Height no more than 3 cm. Its is clean and white, there are sheets underneath of fruit body. These fungi usually grow in groups and rarely. This fungus seems to grow on the pile of old OPEFB or has become decayed. 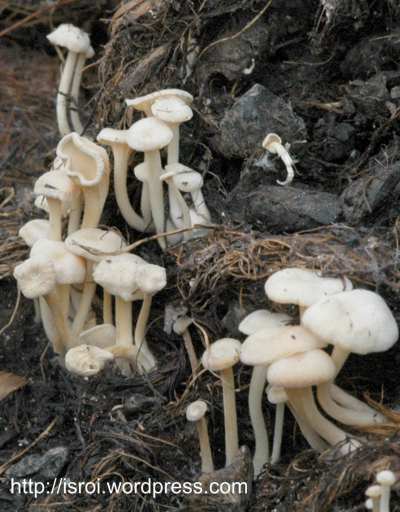 Mushroom that are similar to this mushroom is also found in wood that is decaying. Mushrooms are also small. 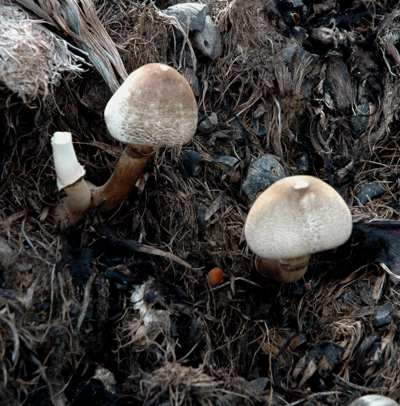 Just call its mushroom as PNG 4 mushroom. Its shape similar with dick mushroom. Many people mistakenly take this fungus. Once in a time there were people looking for mushrooms. He did not know which mushrooms were usually eaten. Then he took this fungus. When cooked and eaten, he felt dizziness and nausea, poisoning. Eventually the person was in care at the hospital. 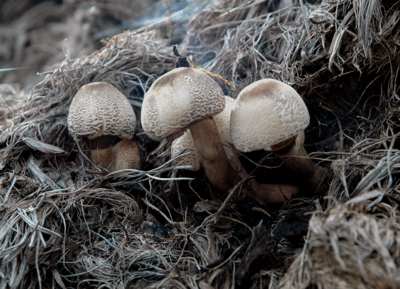 Unfamiliar peoples are difficult to distinguish between dick mushroom and PNG 4 mushroom when its is young mushrooms, because its similar in shape, little orbicular, and gray color. Difference lies in the upper surface of this fungus. On the surface of this fungus are slimy and sticky when held. Dick mushrooms did not like this. Besides, Its mushroom are smaller in shape and could not as big as dick mushroom. This fungus does not have ‘vulva’ like dick mushrooms. If the fruit body is formed would look like a ring at the base stalk. This is one sign of poisonous mushrooms. Be careful not to eat the wrong mushroom, it is very dangerous. 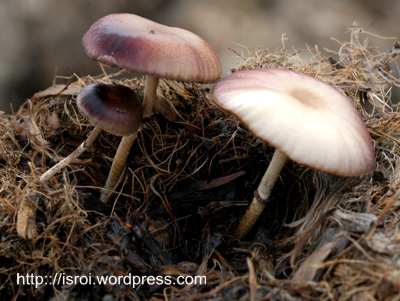 As usual, for convenience we call this mushroom PNG 5 mushroom. These mushrooms are small, approximately 5-10 cm tall, grow together, the fruit body brown-gray and slightly rough surface. On its stem there is a ring shape, so it is also poisonous mushrooms. Do not ever try to eat this fungus, unless you’re tired of seeing the sun.

The fungus grew abundantly on the surface of the pile OPEFB. There are so many, especially after rain. This fungus began to appear on the pile of old OPEFB more than a month. 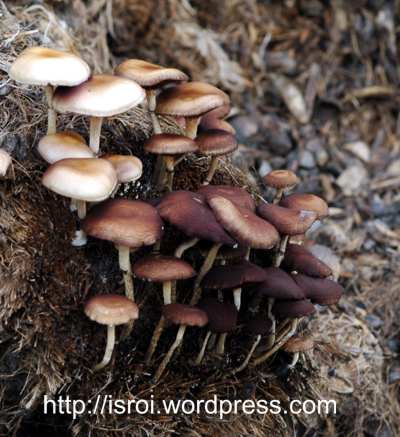 PNG 6 Mushroom, just call it so. Like PNG 5 mushrooms, just the color purple hood. Hood diameter is wider than the PNG 5. The fungus also grows OPEFB huddled in a pile and the pile is found abundantly in OPEFB. These fungi are also toxic, because of its ring in its stem. Striking color also is a sign that this poisonous mushrooms. 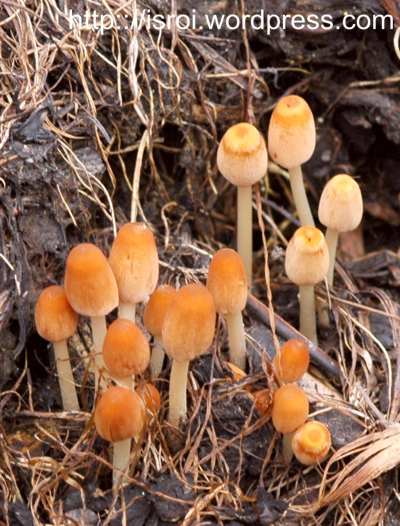 This fungus most beautiful mushroom when compared with other mushrooms. Its color is bright orange, very interesting. The size of the fruit bodies are small and no more than 5cm. Grow in clusters and found abundantly in OPEFB pile. Judging from the bright colors, clear this fungus have suspected of being poisonous mushrooms. If you do not believe please prove himself. Try to take this mushroom, cooked, then eaten. If in a few hours, you are still in good, it probably means that the fungus is not toxic.

This fungus one small mushrooms that I found. Similar shape with molds others. Cream color, a little gray. The growth and size are also clustered approximately 5 cm. This fungus is also found abundantly in the pile of OPEFB.

***
Another pictures of mushrooms: 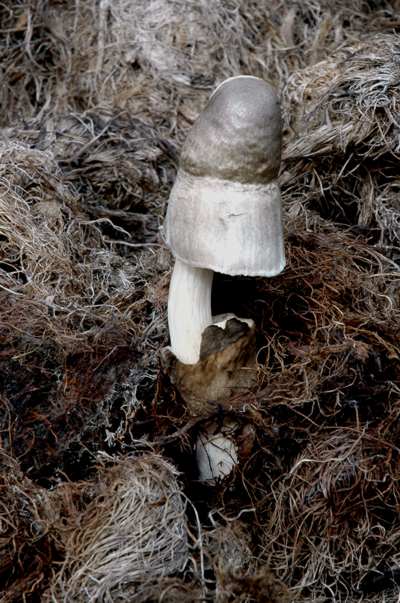 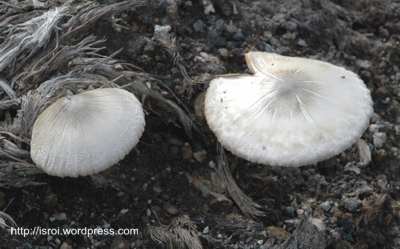 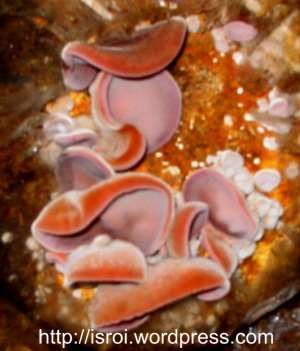 Those were the fungus that I found in piles of OPEFB. There are edible mushrooms, there are also fungi that can not be eaten. I do not know what the benefits of this fungus than could be eaten. However, the results of this survey indicate that OPEFB has the potential to grow mushrooms. Some fungi may play an active role in the decomposition of OPEFB. Maybe there are also fungi that produce enzymes that are useful or have a high economic value. This article describes only the visible fungus. I am sure there are other fungus – or even other microbes which are invisible (microscopic). Who knows of this fungus is a very potential.