Bogor; The City of Angkot and The Most Crowded Road in Indonesia 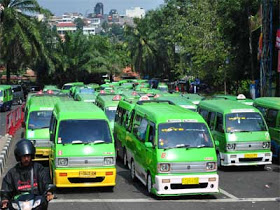 Bogor is very busy city. Bogor population is 987.448 peoples (2012) and 8.838 peoples per km2. For transportation, citizen of Bogor use bicycles, motorcycle or car, but mostly use motorcycles. And, for public transportation there are ‘angkot’ and small bus.

Angkot or angkutan kota is small car with green paint. The route of angkot almost go to every places in Bogor. So, there are several routes with number code. For example: angkot number 2 is Sukasari to Bubulak terminal,  angkot Number 3 is Baranangsiang Terminal to Bubulak Terminal, and so on. Some codes added by small letter for alternate route in the same direction. For example: 2A and 5A. The angkot are mostly available 24 hours per day.

There are three terminal for angkot, i.e.: Baranangsiang, Bubulak, and Laladon. But, Laladon Terminal belong to Kabupaten Bogor and located just one kilometer from Bubulak.

Officially angkot population in Bogor city are 3.412 cars (Data from: http://megapolitan.kompas.com/read/2014/05/07/1524472/Bima.Arya.Ingin.Hapus.Citra.Bogor.sebagai.Kota.Sejuta.Angkot ). But, in reality the angkot population could be higher than these official data, because one angkot licence may be used by several cars. There are also a lot of angkot come from Kabupaten Bogor that almost 4.000 cars. It is a lot. So, Bogor also famous as the one million angkot city.

Even angkot serve the citizen to go to anywhere around Bogor, but sometimes it is not the easier way. Why? Because, for example, if I want to go to downtown I have to use two different angkot. First, I go by angkot no.5 and then continued by angkot no. 3 or no. 2, whereas the distance is no more than eight km. The worse is it need one hour, sometimes more than one hours. Crazy….

Angkot also give other problem. Angkot often stopped in discriminate. Specially when there are no policeman in the road. The angkot will prevent another car or vehicles to pass away. It could be a starting for traffic jam. There are a lot traffic jam location around Bogor. In my route, these are in front of Bogor Palace, Bogor Train Station, Merdeka Street, Gunung Batu intersection, Pasirkuda intersection,  Pintu Ledeng intersection and Ciomas/Panggugah. Sometimes the  traffic jam is very worse at Gunung Batu intersection. It could happen for several hours without any car can move even for one meters.

Government recently release most crowded cities in Indonesia. And the winner is Bogor. Bogor is the most crowded and most traffict jam city in Indonesia. See: http://m.detik.com/finance/read/2014/10/21/161434/2725620/4/2/ini-kota-termacet-di-ri-bogor-nomor-1-dan-bekasi-nomor-6. Average speed in Bogor is 15 km/h. V/C ratio is 0.86. It is mean that the road capacity will full with vehicles.

I personally prefer to use motorcycles than angkot, car or bicycle to go to my office. Distance of my home to my office are 6.8 km. Not so far. But, I use car or angkot it takes almost one hours. If I use motorcycle it just take 15 minutes. I have tried to use bicycle, but it is not good alternative. I will very sweaty and wet. I will also inhale a lot of dirty smoke.

I am dreaming that someday Bogor will be like Göteborg, Sweden or Melbourne, Aussie. The city road are almost free with car or angkot. The park will be beautiful and clean. The air will be fresh.

I hope …. someday it will be come true.

This entry was posted in Uncategorized and tagged angkot, bogor, Indonesia, traffic. Bookmark the permalink.